The Turing Pi V2, which clusters 4x RPi CM4 modules with a Layer-2 managed switch, has added a BMC and support for Nvidia Jetson modules. Meanwhile, Kobol called it quits, but will release its Helios64 NAS design to the masses.

Open hardware projects that lack the backing of sizable tech companies often have more freedom to innovate, but they also face additional challenges in bringing products to market. Combined with the recent industry-wide chip and container shortages, the preeminence of the Raspberry Pi, and increasing market saturation, it has been tough going for community backed hardware projects, as reflected in a lower number of new open-spec SBCs.

Here we look at two independent open hardware projects that have gone in different directions: Turing Machines has revealed some feature changes for its Turing Pi V2 board, which will launch this fall for shipment in Q1 2022. Kobol, meanwhile, announced it was closing up shop and would not advance to a full production release of its similarly open-spec Helios64 NAS platform (see farther below).

Yesterday’s Turing Pi V2 announcement is somewhat misleadingly titled “Turing Pi V2 is here.” The company clarifies this statement later as saying it is “finalizing the board development” and soon expects to receive final prototypes from the factory. 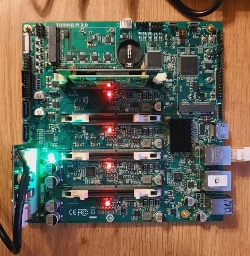 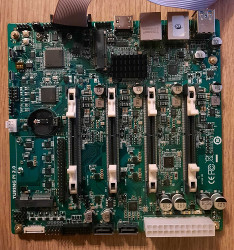 New changes to the Mini-ITX form-factor cluster board design include support for the Nvidia Jetson Xavier NX, Jetson Nano, and Nvidia’s most recent compute module entry, the Jetson TX2 NX. As before, the board supports the Raspberry Pi Compute Module 4.

The Jetson TX2, which integrates 2x Denver and 4x -A57 CPUs is likely to be roughly equivalent with the RPi CM4 in terms of CPU performance, and the 256-core Pascal GPU is superior to the CM4’s VideoCore VI graphics. The Xavier NX is much faster than the CM4, with 6x ARMv8.2 Carmel CPU cores, a 384-core Volta GPU, and 48 tensor cores.

The Jetson graphics cores offer far greater AI performance with the help of Nvidia’s CUDA libraries and other software, giving you up to 21 TOPS performance in the case of the Xavier NX. The quad -A57 Jetson Nano ships with 4GB LPDDR4 and 16GB eMMC while the TX2 NX has 8GB/32GB and the Xavier NX has 8GB/16GB.

Turing says it should be able to support future Raspberry Pi Compute Module designs. Intriguingly, it mentions a Turing Pi TCM module that it expects to launch in 2022. No further details were provided.

The other major addition is an upgrade of the Cluster Management Bus with an MCU that provides Board Management Controller (BCM) functionality. The BCM “and its network work autonomously relative to the compute nodes, making the management plane independent from the control plane and the data plane,” says Turing. BCM features include a watchdog, alerts, diagnostics, power management, remote cluster management and OS flashing.

Although it is not listed as a change, Turing mentions a 10/100Mbps Ethernet port that we do not recall seeing. As before there are 2x general purpose GbE ports and 4x GbE ports dedicated to each cluster node via a 7-port, Layer-2 managed switch with VLAN support. 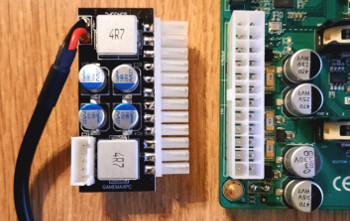 Finally, Turing has clarified its power inputs, which were not originally announced. The V2 has a standard 24-pin ATX connector “to choose between standard ATX/ITX and external power supplies,” says Turing. With a fully loaded setup with 4x CM4 modules, each with 4x 1.5GHz Cortex-A72 cores and 8GB RAM on each module, the cluster should run at under 80W, says the company. The design also supports “fanless builds and compact picoPSU with wide input 6-24V DC for AC-DC adapters along with the car, solar, or battery power supplies.”

In April, the Singapore based Kobol project announced it was taking a two month break, in part due to component delays and higher prices, but also due to burnout. Today, Kobol announced it was “pulling the plug” on the project. 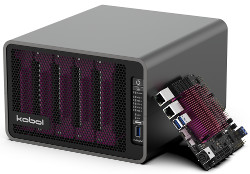 It appears that Kobol shipped all the NAS-oriented Helios64 boards ordered in the crowdfunding campaign, although it took a lot longer than expected. Kobol “will post on the wiki all the blueprints of Helios64,” which “should help people to tinker or even troubleshoot their board when necessary.” In addition, “We are also happy to discuss editing access to our wiki if someone is interested to maintain the project a bit longer.”

In explaining its discontinuation of the project, Kobol cites the ongoing supply and pricing issues. In addition, the Kobol project members realized they had lost their original “motivation and passion.” The team members regretted not having brought in more developers, which led to burnout. After the vacation, the members were unable to find the time for the project or regain their passion.

Turing Machines Inc. will announce Turing Pi 2 pricing and availability information “in the coming weeks.” However, it expects to launch a preorder campaign this fall with shipments due in Q1 2022. More information may be found in Turing’s update announcement.